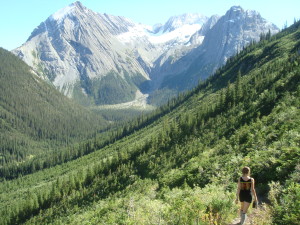 There are months, and even years, in my improv career where I have felt completely stuck. I’ve felt like I was doing everything “right”, and yet, I just couldn’t seem to break out of the same old habits. I was playing the same British lady in every show, gravitating toward the same games, and getting the same notes over and over again. I just couldn’t seem to take genuine risks because they didn’t even occur to me. True risks were not even on my radar. I asked myself the dreaded question, “Am I actually getting worse?”.

Over the years, I started thinking of this feeling as plateau; a flat-line in my development, after a previous period of progress. If you’re an improvisor, artist, or creative, you probably know the feeling.

When you first start improvising, every class feels like you’re learning something new. There are so many milestones! Completing your very first class, the first character you play in a scene, your first class show in front of an audience! It seems like at every turn, there is a new concept for you to wrap your head around, and new risks for you to take!

I’ve seen so many young improvisors quit at their first big plateau. It’s the first time they’ve felt frustrated in an otherwise extremely positive experience, and they feel like there’s something flawed within themselves. It’s tragic, really, because once you’ve been improvising for a while, you start to notice this pattern of growth / plateau / growth / plateau. You get used to it. Once you can identify what’s going on, you can more easily tackle it head on.

Some ideas on how to break out of your plateau:

Talk to someone you look up to
If you’re feeling this way, articulate it. Sometimes even being aware of it is enough.

Read a book about improv or creativity.
My improv brother from another mother, Kory Mathewson, has a great list here. Montreal Improv has cool mini-reviews for a lot of books here.

Reinvest in improv workshops
When’s the last time you took a class? Take another one. Travel for an intensive, seek out an instructor you’ve always wanted to learn from, or revisit an instructor you loved before.

Watch an improv show at another theatre
How often do you seek out improv at a different theatre? What are they doing differently? What do they do well?

Watch an improv show at your theatre
If you’re not in a show, do you usually watch it? Ask yourself, what is this show missing? Look for patterns and gaps in the show.