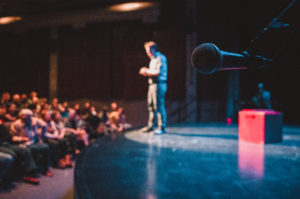 My improv buddies in Edmonton used to joke about LPMs: Laughs per Minute; a fictitious indicator of perceived success. For us, this was a joke, but for many improv companies, audience laughter is what defines a show as good. Without audience laughter, how can we tell if an audience is engaged in the performance?

If you have ever been on stage and received a warm response from the crowd, you probably know that audience feedback feels incredible. Making a huge crowd roar with laughter is one of the best feelings on earth, but laughter is just one of many responses we can solicit as improvisors.

Becoming addicted to laughter as the only and best response from an audience can become problematic when this goal begins to undercut the quality of scene work. An improvisor trying to make the audience laugh is very different from one playing honestly that happens to receive laughter. And, on stage, little is worse than the stanky smell of desperation.

Putting some thought into why audiences laugh can help alleviate some of the pressure to “be funny” as an improvisor, and allow us to trust that reactions will come, as long as we are in the moment.

Recently, in speaking to some students, I came up with four different types of laughter.

Laughter of Discomfort
We laugh when something shocks us. This is nervous, awkward laughter. We all know examples of this we have experienced. Being shocked can be thought provoking, but it can also be a cheap way to get a response.

Laughter of the Intellect
We laugh when something tickles us intellectually. A fun pun, a clever homonym, an impressive rhyme. These laughs often come during punchline games like 99 Blanks, World’s Worst, or Sex with Me. This laugh usually sounds like it is coming from the neck up.

Laughter of Recognition
We laugh when we hear something specific, something we relate to, or something that triggers a memory. In an improv scene, “run down, aquamarine 1986 Toyota Tercel” may get a laugh, whereas “car” may not. We laugh at specific images, and at things we relate to. This can be cathartic, deeper laughter, coming from the gut.

Laughter of Surprise
We laugh when something unexpected happens. If you are playing a scene in line at a grocery store, and you unleash a harrowing, Wilhelm-esque scream out of frustration, you may get a laugh because it is a surprising thing to do in this context. The audience is especially delighted when the improvisor is just as surprised as they are. This kind of laughter happens when improv is at its best, it is magical and involuntary.

All of these types of laughter are valid responses from an audience, but I think variety is the goal. Below is a Ted Talk from Sophie Scott, where she speaks about the difference between involuntary “helpless” laughter, and “posed” social laughter. Next time you are at an improv show, challenge yourself to listen for the laughter. What do you hear?