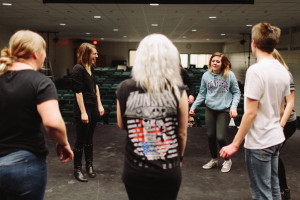 One of my favourite improv exercises is Dolphin Training. I learned it years ago in a workshop led by Patti Stiles, who is with Impro Melbourne. It’s a partnered exercise that I use in almost all of the workshops I lead. It really allows me to get a sense of a group, and assess their ability to take risks.

It’s simple to play. Everyone pairs up. Partner A looks around the room and decides something that they would like Partner B to do. At first it should be simple: sit in a chair, flick the light switch off, close the curtains. Partner B moves silently around the space and tries to figure it out. The only way they know they are on the right track is that Partner A gives them a bell sound, a “ding”. When Partner B does the precise action that Partner A thought of, then they have succeeded, and the partners switch. It’s like a game of “Warmer or Cooler” you may have played as a child, except without the cool.

I love the game for many reasons:
-It trains the feeling of failure. The whole time you are guessing in silence, you feel the panic of not getting it right. You might feel lost or frustrated. Once you sit in this feeling for long enough, you start to get used to it, and slowly you learn to stay calm and keep playing.
-It forces participants to physicalize their ideas. They aren’t able to say “Do you want me to sit in the chair?”, they need to physicalize it. This becomes really important in scene work – showing not telling.
-It reminds us that we aren’t mind readers. Improv is about a give and take, about reactions. There isn’t a road map we’re following, and there are no wrong choices.
-PLUS! – it’s how they actually train dolphins, through positive reinforcement.

In recent years, I’ve been thinking about positive reinforcement, and how to approach my teaching from this perspective. I felt something was broken about how I was leading my students, when I saw many of them obsessed about the “rules” of improv, stressed about doing it “right”, and so in their heads.

When I first started learning improv, we’d do exercises around “blocking”, to demonstrate the difference between accepting an offer and shutting one down. I think that was, frankly, a waste of time. Blocking will happen, why practise bad habits? Nowadays I don’t even talk about blocking in a class, unless a student brings it up. I also don’t talk about “pimping”, or “shelving”.

(Sidenote: Sally Smallwood from People & Chairs wrote a great post about the term “pimping” and how it might be time for a new term.)

I’ve started trying to make a change in the way I lead workshops. I’ve been rewarding improvisors who make bold, risky choices even when they fall flat. The freedom to take risks is what I hope to foster in them. When we debrief about the best moments of a performance, I’ve been focused on not only pointing out big successes, but congratulating people for choosing difficult games, hosting for the first time, or trying on an accent.

My goal is to approach my workshops with the same curiosity I bring to a round of Dolphin Training. Sometimes the only way to figure something out is by doing it.