Photograph by the amazing Patty Varasano.

A couple years ago, a long-time fan came up to me after an improv show and said she noticed a pattern of behaviour in the stories we were telling. She observed that “being an orphan” was often used as a punchline in our scenes. She then, very gently, suggested that this was problematic because there were likely people with different family structures in the audience, and it was unfair to constantly use orphaned children as the brunt of jokes. I politely listened to her speak, but the whole time I was thinking to myself, “I guess we do mention orphans a lot, but we are clearly talking about orphans in the archetypical Dickensian sense! We aren’t commenting on what it must like to actually be an orphan!”

RED FLAG! My emotional reaction to this legitimate observation was absolute garbage, and it exposed in me the defensive feeling that so many people in positions of power must be feeling these days. Instead of listening empathetically, acknowledging my role in the narrative I was a part of, and working to change it, my gut reaction was to pay lip service to the complaint, while actually dismissing it.

And this is a big problem. After all, there are a lot of words other than “orphan” you could substitute into this all-too-familiar story.

Given the recent events in America, and the fierce ripples being felt here in Canada, I think, as artists, we all must reflect on what our work means. Some people are saying this week’s #BoycottHamilton controversy is a distraction from the real issues happening in the States, but to me, it is a strong reminder of my crucial role as an artist.

The deeper messages of the stories we tell on stage have lasting impact, and therefore we are responsible for them. We make meaning when we improvise, when we make art, when we communicate. Improvisation is part of a dialogue about our world, about ourselves, and about each other.

Improvisors Joe Bill and Mark Sutton from Chicago, talk about how the scene isn’t about fixing a bike, or painting a fence, or taming a lion. The scene is about relationships; it’s about humanity. Kevin MacDonald, from Kids in the Hall, calls this “The About About”. Scenes aren’t about scouts on a camping trip, or businesspeople out for lunch, scenes are commentary on youthful independence, or ruthless corporate culture.

At Rapid Fire Theatre, we talk about “punching up” or “punching down” in our scene work. Punching down is poking fun at a person with little or no societal power (ie. making jokes about homeless people), while punching up is satirizing a person in a position of power (skewering an ignorant dictator, satirizing a billionaire, mocking the patriarchy). Punching up opens a dialogue about an issue and questions the inherent power dynamic in our society, punching down is a cruel, privileged, lazy way to shock people. You can improvise a scene about any topic; it’s what you say about the topic that matters.

Are your scenes about the courage of a child who is silenced, the bravery of a woman protagonist, or how to embrace a different way of life other than your own? Or do your scenes lean on cultural stereotypes, shrug at rape culture, or back away from saying anything important at all?

When I get off stage, I hope that the audience better understand my joys, fears, and curiosities about the world. It’s true that some stories are hyper-political, and others are less-so, but as long as we bring self-awareness to our work, we will tell stories that are deeply important to us.

If we are complacent, safe, and choose to say that theatre is “just for entertainment”, I think we are doing a disservice to our rights and freedoms. We are silencing ourselves from doing work that matters, and we are taking away the audiences’ ability to see themselves reflected on stage.

Our world is in too much danger to perpetuate ignorance. We have to stop making excuses for scenes that punch down, and scenes that reinforce dangerous patterns of behaviour with no consequence. Artistic Directors, instructors, and fellow performers, in a time where the arts may be faced with more censorship than ever before, I urge you to use your voice for good. Inspire. Provoke. Share your passion.

Photographs of the Würzburger Improtheaterfestival by Patty Varasano. “An Artist’s Duty” video with Nina Simone released by her estate.

What is the worst that could happen on stage?

There is no limit to how many awful on-stage moments we can dream up when we are standing backstage. Fear and judgement are the evil siblings to joy and trust, and we all have moments before, during or after a show where the whispers of our nagging fears take hold.

“I’ll embarrass myself.”
“People will think I’m dumb.”
“I won’t have anything to say.”
“If I follow my impulse, I will say something offensive.”
“I’ll trip and fall.”

I’ve been thinking a lot about fear, and how we can better use what scares us rather than try and stifle it. As Jan Henderson, a clown teacher at the University of Alberta says, “What you resist will persist.” 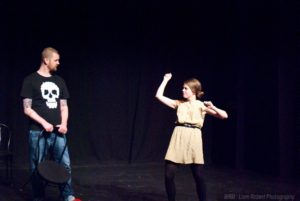 A few years ago, when I had to opportunity to direct the ensemble at the Vancouver Improv Festival, I took a gamble on a format. I had the whole ensemble write down their on-stage fears. We didn’t workshop it. Half the ensemble would do this mystery format, the other half would do one we spent a whole day working on.

We had huge sheets of paper, with the fears written on them. I reworded all the fears to be active challenges, that could be played. 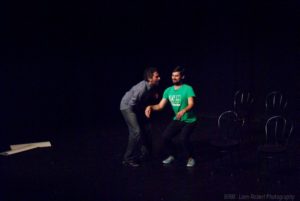 In this photo, Ben is playing “I am furniture.” Kareem Badr & Ben Gorodetsky at VIIF 2013. Photography by Liam Robert.

I wrote out about 20 different fears; all of them very different. Performers would step forward, read the fear off their paper, and hold it up so that the audience could read it too. Each person knew their own challenge, but not their scene partner’s. The chances of getting your own fear were low, but not impossible. Then two performers would do a scene together, playing out their challenge. The combinations of fears (“I am too angry” with “I’m annoying”, or “I can’t stop laughing” with “I am robotic”) lead to really bizarre and delightful scenework.

I think this show was successful because:
-It could have utterly failed. The show in itself was scary, and committing to it was a risk.
-The audience was let in; they saw both challenges, and watched the players discover each other’s  in the moment
-The improvisors committed 100%; the scenes did not look like the improv scenes we often watch. Each scene had a completely unique dynamic.

Once a fear is no longer something you are working against, or resisting, it becomes fun to play. Tripping a lot, or mumbling a lot, are great choices, as long as they are choices. The audience knows when we are nervous, or trying to hide something, but if we embrace it and do it more, we can harness our fears for good. And, once we stop resisting something, that feeling will pass, and we can move on to something new.

The gang at the Hideout Theatre in Austin, Texas, recently performed this format, directed by the lovely Roy Janik, at their 47-hour improv marathon. It reminded me how much I loved this experience!  You can read all the great fears that the Austin improvisors wrote down here.