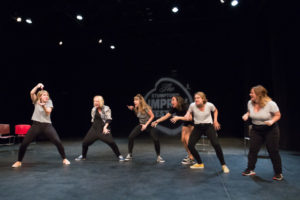 My mom asked me the other day, “What happened to your blog?”. This confirmed two things:

It just so happened that in July, I was at a festival with a high concentration of fierce, brilliant women improvisors. We’re talking crème-de-la-crème here. And it JUST so happened, at that same festival, one of the headlining acts was detained, and couldn’t make it. And so, a time slot needed to be filled. And it just so happened, the festival directors asked six of these fierce, brilliant women I mentioned before to perform.

It’s rare, an opportunity like this, and it’s pretty much my favourite way to improvise. Find a relatively high-stakes scenario (like performing on the sold-out final night of a festival). Put together a random assemblage of performers who you admire. Decide right before the show what you will attempt to do. Do a couple circle warm ups. There’s not much more you can do to be ready. You don’t have time to worry, days leading up to your show. You don’t have the woulda-shoulda-couldas post-show.

Our show was electric. From the first second we were on stage I felt like I was glowing from the inside out. How could I not be? I was on stage with one of my oldest friends, and the brightest talent, Kirsten Rasmussen. Next to me was one of my creative besties, the ever-rad Ember Konopaki. Then there was Leigh Cameron, who I performed with in a VIIF ensemble, who is brilliant with characters, and a gorgeous weirdo. Oh, and as if that wasn’t mirth enough, Kristen Schier was there too! She’s an absolute beacon of positivity and inspiration. And Laura Doorneweerd from Amsterdam, who has a great mind for form, and a beautiful patience when performing. Basically, you took a bunch of my heroes and put them on stage together. We were also joined by a musician who I had just met, named Kyle, who was also pretty damn special. Oh, and did I mention, we all wore matching outfits and it looked FUCKING GREAT?! 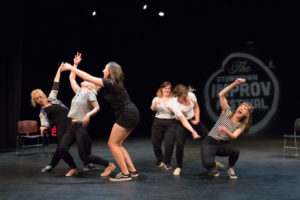 We had planned to do a form that Kirsten had pitched: alternating matching scenes (where improvisors join the energy of the other characters on stage) with an increasing number of improvisors (first 2, then 3, then 4, 5, 6), with more grounded two-person scenes. By the third beat of the show, which was a very funny group game about basketball players who are constantly losing the ball, we all had jumped in, and the format was OUT THE WINDOW. We were flying beat to beat, completely flowing in agreement, soaking up the whole stage, throwing in a song in the middle of a group game, making some amazing callbacks, and ending on a bookend to the beginning of the show.

When it was all over, I was shocked. The audience also seemed shocked. They stood up for an ovation. I was awash in the whole mystical experience.

How could we have done such a cohesive show? Some of the women hardly knew one another. We didn’t rehearse. We randomly asked for a musician, having no idea how we would use him. And between you and me, our outfits could have matched more… HOW WAS THIS SHOW EVEN POSSIBLE?

We had no idea what would happen. They audience understood that too. And that excitement, when combined with the power of our training, our belief in one another, our commitment to good work, and our trust in the moment gave us an amazing show.  That’s the magic of true spontaneity.