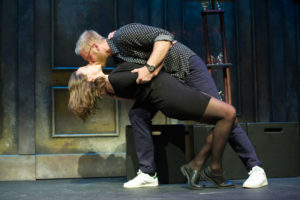 Physical intimacy is one of our storytelling tools as improvisors. How we touch, or don’t touch, and our proximity to our fellow performers gives the audience cues about the relationship. Indeed, a simple pat on the shoulder, or holding hands with a scene partner, can go a long way in terms of giving texture to the scene. So can a kiss, or a full body hug, or a well-timed, comedy stage-kick to the groin.

Recently, Steve Fisher of NOW in Toronto, wrote The Ins and Outs of On Stage Intimacy, in which he profiles the work of intimacy coach Tonia Sina. She offers that, “Intimacy must be treated as choreography and should never be improvised.” I think she has a point. The article got me thinking… As improvisors, we often make assumptions around safety when it comes to physicality (for example, I would never use fight choreography in an improvised scene, unless the whole cast had the same understanding of the physical vocabulary), so why don’t we do the same when it comes to physical intimacy?

For me, a kiss has often signalled the end of the scene. My scene partner and I embrace, lips touching, and often the lights fade. End of story. For better or worse, this is how I see most kissing in improv used: as a resolution to a scene about some aspect of romantic love. With ensembles I work with regularly, and even experienced improvisors who I don’t work with regularly, I am fine with a quick closed mouth kiss to end a scene, but I acknowledge that not everyone shares my opinion, nor should they.

However, a few months ago, I was in a mono-scene where I was seducing a fellow performer. We were half way through our 40-minute set – it was not the end of the show – and I could feel that we were building to a intimate moment. This choice was in context of the characters and the narrative we were exploring; two married people having a tryst while their spouses were out of the room. The spouses were gone, and it was time to finally show what we had set up.

Now, I trust this performer, on stage and off – we perform together a lot, they’re a dear friend, and a professional actor. But when the moment came to make a move, I was paralyzed. I had cornered myself into a game of chicken, and it was fun for a while, but now I was stuck there. I knew the lights wouldn’t come down if we kissed, because of the constraints of the show (lights were to stay on our whole set), so we’d have to kiss again. And then what? AND THEN WHAT?! My heart was racing, and my gut said no. I pulled away, changed the subject, and when we got off stage, I felt crummy for wimping so hard on his offers and my own.

Working up to this particular performance, which we knew would explore the dark parts of relationships as realistically as possible, we hadn’t made on stage intimacy part of the discussion. I think now if we had a mutual, previously-discussed understanding about physical connection, I think I would have felt more comfortable in the moment. Or maybe not. Either way, I made the right choice for myself in that instant. Even if my choice was because of my own insecurities with my partner or the audience, and it weakened our story overall, it doesn’t matter. We need to start defining behaviours, and our permissions around them, in order for them to be part of our repertoire as an ensemble, regardless of whether these behaviours become part of our shows or not.

Personally, I am guilty of having doled out some kisses on stage without knowing if my scene partner was comfortable with them. Often times, as an afterthought, I have asked, “was that ok?”. The countless instances of sexual harassment that have come to light in recent months in comedy communities across North America have affirmed that my previous approach was less than ideal. It is imperative to start addressing this topic in our performance groups, as well as workshops, proactively, rather than as an afterthought. It all comes down to respecting your fellow performer, and their boundaries, as well as your own. Consent is required.

When I visited the Contemporary Theater Company in Wakefield, RI, one of the young performers approached me before a Maestro show. “Is there anything that is off limits for you, physically?”, he asked. He did so in a way that was gentle, friendly, and not a big deal. It was a learning moment for me. Before a show, as performers, we are backstage for half an hour or more. It only takes two minutes to ask everyone. Maybe someone isn’t comfortable kissing, maybe someone has a back injury, maybe everyone is cool with writhing in a ball. It’s that simple, and it’s worth it. No explanations necessary.

Saying “yes” and accepting offers is one of the key tenets of improvisation, but when it comes to onstage intimacy, you don’t have to do anything that makes you uncomfortable. We need to make onstage intimacy part of the discussion before we hit the stage. Never say “yes” at the expense of your gut.

A huge thanks to Paul Blinov, a writer and improvisor from Edmonton’s Rapid Fire Theatre, for editing this post for me. Photographs by the rad Marc-Julien Objois (http://marcjulienobjois.com).